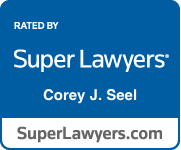 Mr. Seel attended Baylor University School of Law where he was an Associate Editor of the Law Review and a member of the Harvey M. Richey Moot Court Society. Upon graduating law school, he joined MehaffyWeber where he has practiced for over fifteen years representing both plaintiffs and defendants. Clients have come to rely on Mr. Seel for his expertise not only in the courtroom, but also in avoiding costly litigation. He helps his businesses stay out of the courtroom by providing consulting to his clients regarding oil and gas transactions to protect against future litigation; including the negotiation and drafting of purchase and sale agreements, master service agreements, and joint operating agreements.

He is recognized in the Texas Super Lawyers by Thomson Reuters List every year since 2018.

Corey Seel and the MehaffyWeber team obtained a $2.775 million verdict in a wrongful death case against Nabors Drilling on behalf of the Estate of Hubert “Bubba” Olivier. Mr. Olivier was killed working on a Nabors rig in Louisiana. The jury found comparative fault of 49% against Nabors, 40% Olivier and 11% employer.

More Info: Cause No. 2014-38068; Amanda Olivier, Individually and as Administrator of the Estate of Huber “Bubba” Olivier, Deceased and Debra Olivier as Next Friend of Braxton Olivier, minor child, Marceta Faulk as Next Friend of Dylon Blaize Olivier v. Nabors Drilling USA, LP; In the District Court of Harris County, Texas, 80th Judicial District

Jeremy Stone and Corey Seel represented A.J. Crane Baku, which was sued by Cowboy Truck for suit on a sworn account and breach of contract related to equipment purchased and installed in a heavy transport truck. A.J. Crane filed counterclaims for breach of contract, fraud, DTPA violations and other causes of action. The jury returned a verdict in favor of A.J. Crane on its defenses, as well as its counterclaims, awarding A.J. Crane substantial damages, including attorney’s fees and treble damages for a knowing DTPA violation.

Forum US brought suit alleging breach of a non-compete agreement, misappropriation of trade secrets, breach of fiduciary duty and breach of confidentiality agreements and various aiding and abetting such actions against Jeff Musselwhite, Audie Romero and their current employer, Antelope Oil Tool and Manufacturing. Corey Seel and the MehaffyWeber team represented Antelope and Wearsox, LP (an alleged co-conspirator). Antelope was alleged to have hired Musselwhite and Romero, encouraged them to breach their agreements with Forum and misappropriate Forum’s trade secrets. Forum sought up to $25,000,000 in damages from Antelope during the trial but asked the jury for $9,000,000 in actual and punitive damages during trial. Prior to trial, the Court invalidated as a matter of law the non-compete agreement. After a nearly six week trial, the jury returned a verdict in favor of the defendants finding that there were no breach of confidentiality, no breach of fiduciary duty and that Forum’s alleged trade secrets were not trade secrets. The jury also determined that Forum knew or should have known that the non-compete agreement was overly broad at the time it was entered, which allowed for the recovery of attorneys’ fees.