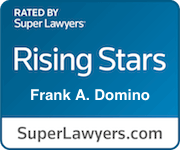 Frank A. Domino is a shareholder with MehaffyWeber who focuses his practice on civil litigation and appeals.  He handles personal injury matters, commercial and business litigation matters, property damage claims, and insurance defense.

Mr. Domino graduated with honors from Lamar University with a degree in Environmental Science, and then worked as an Environmental Investigator for the Texas Natural Resources Conservation Commission before attending South Texas College of Law. During his time in law school, he served as a law clerk for the Honorable Elizabeth Ray in the 165th Judicial District Court. He was also a member of the Law Review, the Order of the Lytae, and the Phi Delta Phi legal fraternity. After graduating Magna Cum Laude with his law degree, Mr. Domino served as the briefing attorney to the Honorable Adele Hedges, Court of Appeals in the First District of Texas and then the Honorable Jane Bland, Court of Appeals in the First District of Texas.

In 2004 he joined MehaffyWeber and has since been focused his practice on litigation and appellate work.  His legal work has earned him recognition with inclusion in the Super Lawyers “Rising Stars” list by Thomson Reuters (2007-2011), and he is currently a member of the Texas Association of Defense Council and the Jefferson County Bar Association.

In a special proceeding instituted under the New York Business Corporation Law, MehaffyWeber filed a petition in intervention in the New York Supreme Court for Queens County, arguing that a dissolved manufacturer who had been in litigation for decades was still in the process of winding up its affairs, and as such remained subject to suit for contribution and indemnity claims brought by companies sued as alleged distributors of the dissolved manufacturer’s products. The manufacturing defendant then appealed to the New York Appellate Division. For the appeal, Barbara Barron and Frank Domino were hired by numerous companies sued as alleged distributors of the manufacturer’s products. The Appellate Division after briefing and oral argument found in favor of the distributors.