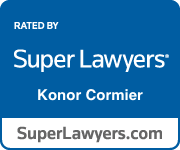 In the area of oil and gas, Konor has represented operators, lessees, mineral owners, royalty owners, as well as equipment suppliers and manufacturers throughout Texas with focus on those areas of the State that include the Eagle Ford Shale and Permian Basin. His specialty is complex commercial cases that are document intensive and involve working closely with experts in a variety of fields. He also represents a product distributor in all phases of its contract negotiation, contract and product liability litigation, collections, and appeals. Konor handles appeals in both state and federal courts of appeal. He has handled securities arbitrations under FINRA as well as commercial disputes under the AAA.

Konor is a native of Beaumont, Texas who joined MehaffyWeber as an associate in the firm’s Houston office in 2003. His hard work and dedication to the firm’s clientele was rewarded in 2010 when the firm elevated him to shareholder. Konor is an avid traveler both across the United States and internationally, but spends the majority of his time outside of work with his wife and daughter.

Konor Cormier of MehaffyWeber represented the Superintendent of Financial Services for the State of New York in his efforts to collect on an earlier $28 million judgment against an individual debtor. MehaffyWeber served SureTec Insurance Company with a writ of garnishment over $438,000 alleged to belong to the judgment debtor. Both SureTec and an intervening party contested the garnishment and disputed the debtor’s ownership of the funds. The case proceeded to trial and, after hearing evidence, the Harris County jury found that the judgment debtor did have title or ownership of the $438,000 held by SureTec. The Honorable Erin Lunceford entered judgment finding the garnishment was proper and ordered the release of the funds to the Superintendent.

More Info: Cause No. 2013-36621A; Benjamin Lawsky, Superintendent of Financial Services for the State of New York v. SureTec Insurance Co.; In the 61st Judicial District Court of Harris County, Texas

MehaffyWeber represented a Taco Bell franchisee whose streetfront sign and property were destroyed in an auto accident. The defendant argued that he had swerved to avoid an intoxicated pedestrian. The plaintiff argued that the defendant was negligent because he swerved across four full lanes of traffic and a sidewalk before hitting a sign a few hundred yards away. The jury found the Defendant 51% negligent and the pedestrian 49% negligent. The jury also found that the Defendant was 70% responsible for trespass and the pedestrian 30%.

In May 2014, Konor Cormier successfully defended an appeal in the Court of Appeals for the Thirteenth Court of Appeals in Corpus Christi, Texas. The case was a products liability suit involving an allegedly defective piece of steel pipe that failed in a pipeline. The plaintiff sued everyone in the distribution chain including his client, an intermediary pipe distributor, in district court in Nueces County. Mr. Cormier’s client filed cross-claims against the Chinese manufacturer of the pipe. The trial court denied the manufacturer’s special appearance which filed an interlocutory appeal. He took lead on drafting and filing an appellee’s brief on behalf of his client and all the non-manufacturing defendants participating in a joint defense group. The Thirteenth Court of Appeals agreed with the defense group’s briefing and affirmed the denial of the special appearance. The case was later resolved by the parties.

In March 2014, Konor Cormier was part of a MehaffyWeber trial team that successfully litigated and settled an adversary proceeding on behalf of the plaintiff against a title company in the Bankruptcy Court for the District of Arizona. The plaintiff was the Trustee of numerous related bankrupt companies. The plaintiff filed suit against the title company for its role in a fraudulent multi-million dollar real estate investment scheme perpetrated by the directors of the bankrupt companies. The plaintiff claimed the title company had actual knowledge of and actively participated in the Ponzi-like scheme involving hundreds of residential properties in Arizona from 2002 to2007. The Trustee sought damages on behalf of both the companies and over 100 individual and institutional investors in the fraudulent scheme who had assigned their claims to the Trustee. The plaintiff alleged breaches of contracts, breaches of escrow instructions, breaches of fiduciary duties, aiding and abetting breach of fiduciary duty, fraud, aiding and abetting fraud, breach of the implied covenant of good faith and fair dealing, negligence and securities fraud.

In October 2009, Konor Cormier successfully obtained a summary judgment in favor of his client, the former executor of an estate in Probate Court in Harris County, Texas. The plaintiff appealed the decision. However, Mr. Cormier successfully defended the appeal in the First Court of Appeals in Houston, Texas.