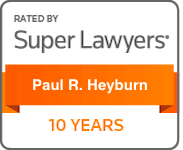 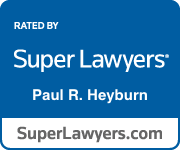 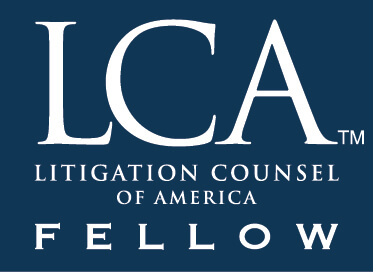 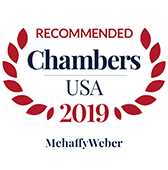 Paul Heyburn specializes in complex litigation matters with an emphasis in products, premises, environmental, commercial, and personal injury cases. His clients have ranged from family-owned businesses to Fortune 500 corporations. Paul has coordinated multi-state litigation for national clients and has successfully tried to verdict cases with damages alleged in the tens of millions of dollars.

Prior to attending law school, Mr. Heyburn worked as a commercial lines underwriter for Aetna Casualty & Surety. This experience gave him insight and understanding into complex insurance issues that have proved invaluable to his clients. Mr. Heyburn joined MehaffyWeber in 1994 after serving for one year as a briefing attorney to the Honorable Chief Justice J. Curtiss Brown of the Fourteenth Court of Appeals. Mr. Heyburn’s dedication to his clients and leadership skills led to him to become a shareholder in 2000 and he has continued to lead the firm as a member of the compensation, marketing, and management committees. He has been listed in The Best Lawyers in America® for Personal Injury Litigation – Defendants since 2021 and was selected to Texas Super Lawyers List by Thomson reuters (2006, 2012-2022).

In addition to his work at MehaffyWeber, Mr. Heyburn is an active member of Mackrell International, a global network of independent law firms comprised of 90 members representing a total of 4,500 lawyers and attorneys working out of 170 offices in 60 countries. Currently, Mr. Heyburn serves as the Head of Practice Groups, leading over 1,000 attorneys around the world. He has also served as the Chair of the Energy and Natural Resources Practice Group, as well as the Chair of the Environmental Law Practice Group for Mackrell International. Mr. Heyburn was also selected as the exclusive Environmental Law member in Texas for IR Global – a multi-disciplinary professional services network providing legal, accountancy, financial advice to companies and individuals around the world.

Paul Heyburn represented several multi-national corporations in a five week trial involving CERCLA cost recovery for a $30,000,000.00+ Superfund site. Mr. Heyburn obtained a finding of no liability for his clients.

MehaffyWeber represented Dow Chemical Co. and obtained a defense verdict on February 1, 2008. In 1999, Alton Wolf died of lung cancer, at the age of 65. Wolf’s widow and adult children sued Dow for gross negligence, alleging that Mr. Wolf’s cancer was caused by exposure to asbestos in the workplace and that the workplace was unsafe. Alton Wolf held various jobs, such as a pipefitter and operator from 1952 to 1987 as an employee of The Dow Chemical Co. in Freeport. Dow Chemical contended that it operated its facility in a safe manner, that Mr. Wolf’s asbestos exposure was minimal and his cancer was caused by his smoking history of at least 40 pack-years.

MehaffyWeber obtained a summary judgment on successor liability claims made by personal injury claimant against a Fortune 100 client.. The judgment was sustained on appeal.

MehaffyWeber successfully represented a Fortune 100 company in a product liability lawsuit regarding heavy equipment used in the logging industry. The plaintiff was the insurance company of a logging company that purchased an excavator with a logging attachment. Several years later, the machine caught fire and was totally destroyed. The plaintiff argued that a defect in the machine resulted in the fire; however, Mr. Heyburn obtained a dismissal based on no evidence of manufacturing or design defect as well as the economic loss rule. He successfully defended the appeal through the Texas Supreme Court.

Paul Heyburn obtained a finding of no liability for a Fortune 1000 client for a plaintiff seeking recovery for personal injury sustained as a result of a collision between a train and a tractor-trailer.